73 replies to this topic

Congrats on the alates! I’m hoping for alates from my P. bicarinata this year. I’m starting to feed them two dinners a night to that end. Pheidole are so cool.

That pheidole bilimeki  colony looks incredible! Never seen anything like it. However it is very strange. I read somewhere that ants tend to have a ratio of majors to minors. So that is really strange!

Nothing new with these guys. Still a ton of workers and no alates.

We've got alates, and a ton of them at that! Not sure if anybody else has gotten a captive colony to alates, but needless to say I'm very proud of myself and this colony. It looks like I'll be getting around 200+ males and 2 queen alates. Quite the ratio if you ask me.

Out of hibernation they've gotten a good amount of brood, but nothing too special to see.

This colony has decided to make a population of about 85% majors for some reason. Not sure why they decided that they don't need minors but hey, it looks neat.

This colony unfortunately died. All of the workers randomly died one day, and I'm not sure why. I tried using vinegar to introduce the queen to some P. pilifera workers, and after about an hour of it seemingly working and the queen being groomed, they just killed her. Not sure why that happened, but it's quite sad. I'll have to try this species again this year.

Just yesterday I collected this colony on Mt. Lemmon. I was able to get 8 majors, 20 minors, and 2 larvae, and the queen has already laid new eggs overnight. Pretty excited to keep these guys again.

"This colony would seriously eat me if they were any larger."

FINALLY!! I was so happy to peek in their nest and see piles upon piles of queen alate pupae! I also saw at least one male, but they're definitely producing far more queens. It's gonna be so awesome to see those cute little queen alates running around! 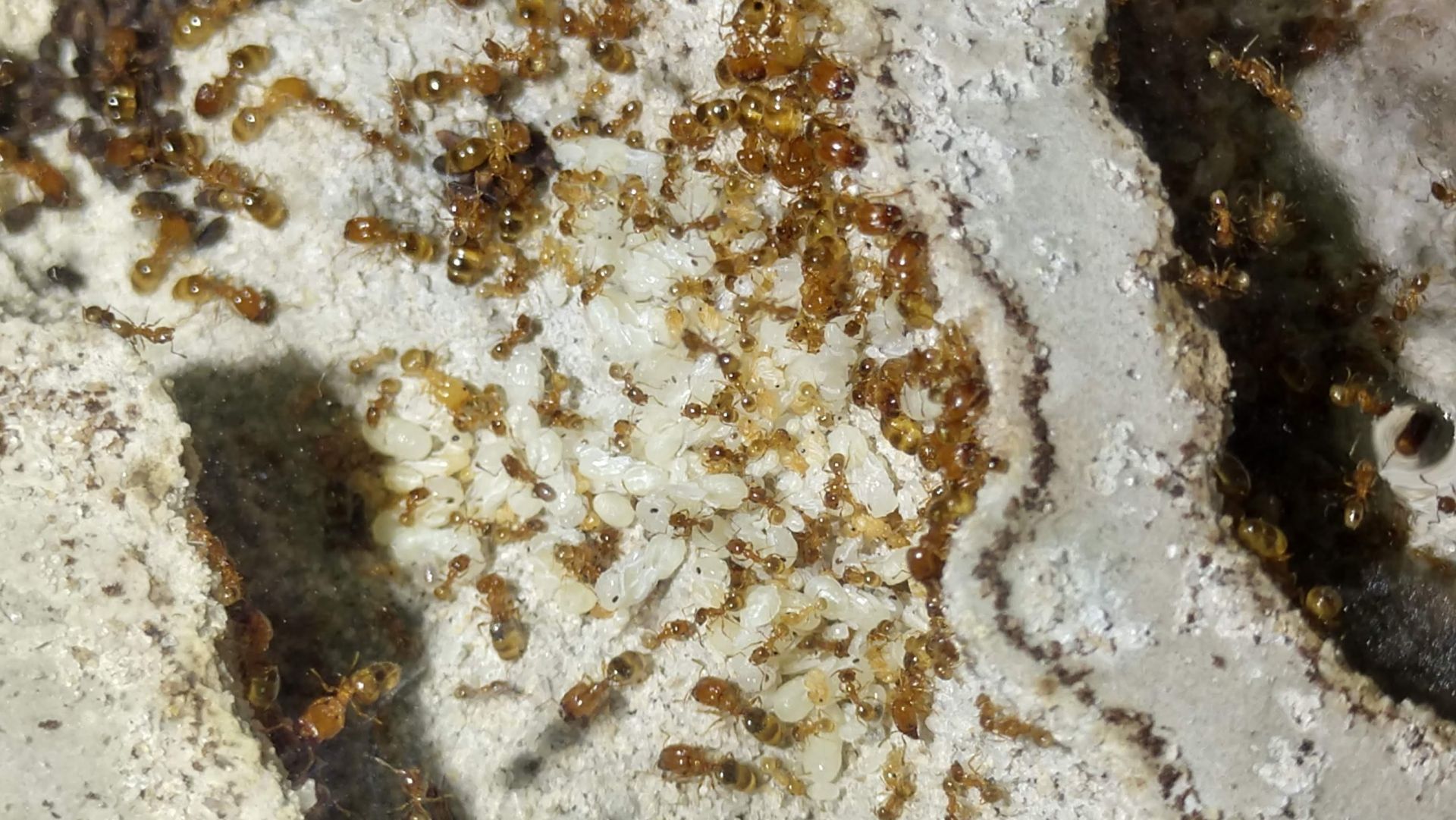 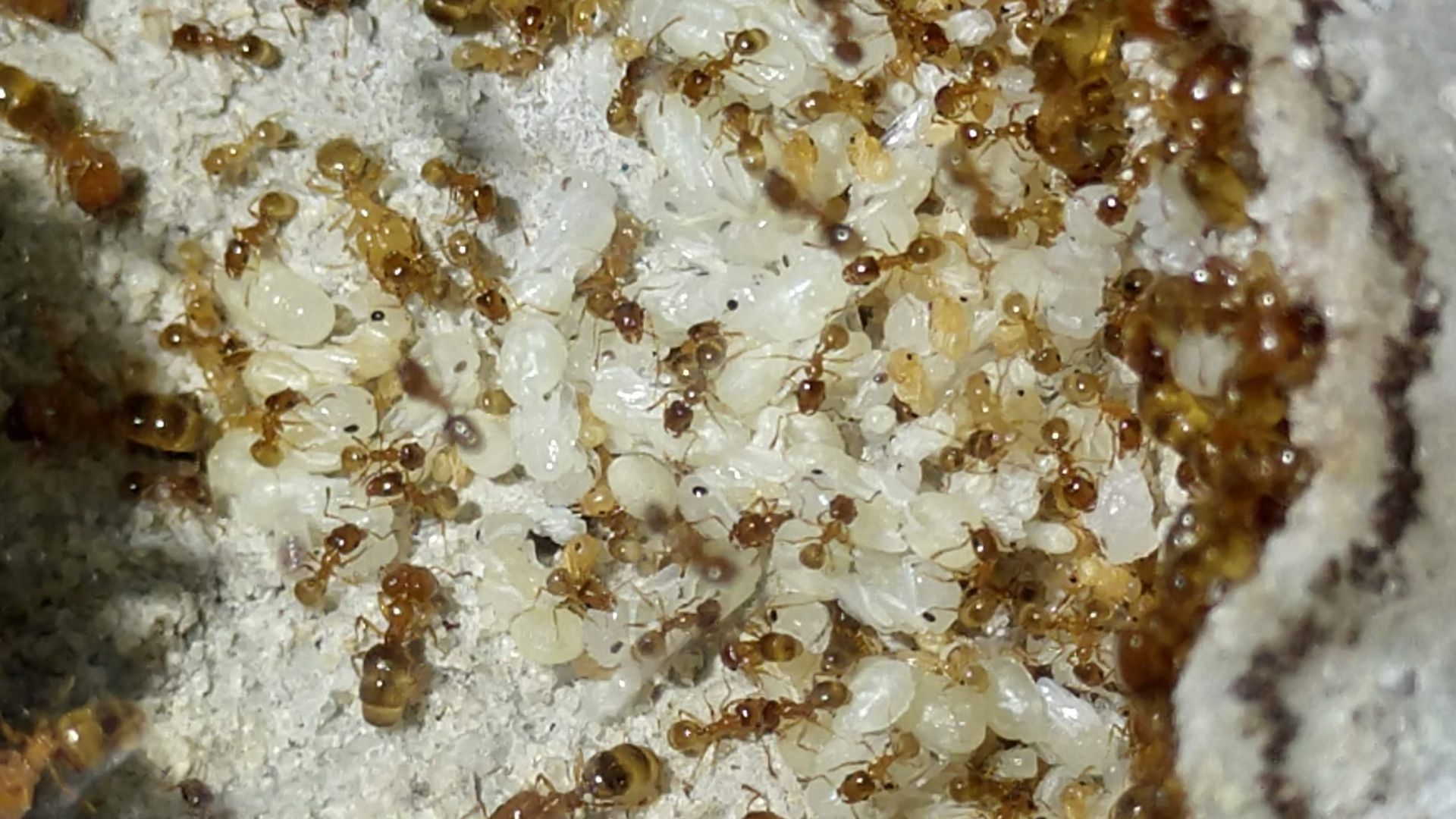 This colony's worker numbers totally tanked after making alates. They've now stopped alate production and pretty much all of them have died off, and they have a decent pile of worker brood again, but they're definitely nowhere near their previous peak in numbers.

Despite me caring about this colony so little I almost forgot to include them in this update, they're actually doing ok. Definitely steadily growing with a solid brood pile.

This is what I've really been excited to show you guys. Around 2 weeks ago I was flipping rocks with some friends at Madera Canyon and was lucky enough to find a P. obtusospinosa colony with their queen right on the surface! I quickly scooped the queen into a tube and grabbed as many workers as I could. Just in case you're out of the loop on why this species is so cool, as you can see in the picture they have supermajors! This colony only has two right now, but their queen has been putting in a ton of work to get their worker numbers back up. I have no doubts that this colony will do awesome in the future. Here's a few videos on them too! I just can't get enough of them to say the least.


When they hunt they also pull apart their prey kinda like Oecophylla! It's soooooooo cool. Another new addition to the Pheidole Phamily, found while I was flipping rocks in Payson, AZ. It was definitely surprising to see that well, they had 3 queens! Polygynous Pheidole are not common by any means in the US, so this was a super awesome find to me! I dumped them in a Mini Hearth and they moved in really quick! They have a TON of brood as expected of 3 queens, so I think they're gonna be a lot of fun in the future. Awesome! My pheidole californica also got alates! Pretty strange for me though. Because they still are a very small colony and are under 100 at about 300 workers.

What do you mean by warriors? I have never heard that term for ants before. If you mean they protect the colony, yes they do. But of course the minor workers mainly do that job. They just swarm the enemy. Majors are mostly used for the breaking down of foods like other insects, seeds, and nuts.

What do you mean by warriors? I have never heard that term for ants before. If you mean they protect the colony, yes they do. But of course the minor workers mainly do that job. They just swarm the energy. Majors are mostly used for the breaking down of foods like other insects, seeds, and nuts.

I thought maybe they were made to fight .. like when a colony gets big and wants to take on new territory lol ... I'm rather new and jumped to a conclusion..

P. obtusopsinosa supermajors are actually designed for battle, specifically against army ants. You can read about their defensive behavior on antwiki, it's really interesting to read about.

always wanted pheidole, live in California but can't seem to find any.

update??? these pheidole are awesome!!!!

Awesome! My pheidole californica also got alates! Pretty strange for me though. Because they still are a very small colony and are under 100 at about 300 workers.

do you have any information you could share with me about californica??? I am looking into keeping them this next season.