So my ENTIRE backyard is just a huge connected colony of Tapinoma Sessile. And I mean my ENTIRE yard. Around every 3ft or so, there is a nest entrance. There must be hundreds of thousands of ants. It's incredible. Fascinated by these little guys, I decided to try to keep them in captivity. There hasn't been a nuptial flight so far this year, so I decided to dig up a colony of them. I don't ever condone doing this at all, and removing ants from ecosystems can be devastating to local wildlife. But as I previously mentioned, these ants are hugely established where I live, so removing one small nest would most likely have no effect on my local ecosystem or these ants. That being said...

I went out with a shovel, some gloves, and a five gallon home depot bucket to dig up a colony. I found a small nest with three entrances clustered together, and dug the nest up. I immediately saw at least a hundred ants panic and pick up the larvae from the various brood chambers I happened to dig up. I put this large clump of dirt in the bucked and kept digging. These ants nest very close to the surface, so I got most of the colony out by doing this. I scooped out a few more chambers before deciding to go with what I had. I then realized being the idiot I am, I didn't prepare for this at all. I rushed inside to get my supplies, a size one ants aus acrylic nest, and a large plastic bin coated with baby powder and rubbing alcohol. I dumped the ants into this, and decided to wait for them to move in. I checked on them and saw no ants had moved in. I also realized the ants could cross the barrier with ease, and that it clearly wasn't strong enough to deter them. They are tiny little escape artists, and I would recommend keeping them in extra secure setups. I applied an olive oil barrier instead, and found the ants had a hard time scaling up this. If you plan on keeping these ants, use an oil based barrier! The ants fell right back down as soon as they touched the slippery oil barrier. Problem solved. That same day I found what is either a Lasius Umbratus queen or a Tapinoma Sessile queen. I keep seeing these queens just walking around randomly even when there are no nuptial flights. I'm pretty certain it's a Lasius Umbratus queen based on the size of her head and the shape of her gaster. I've seen that Tapinoma are actually hosts to Lasius Umbratus. I'm not sure if this is normal, but I've seen this behavior multiple times in my yard. Since I didn't know if they even had a queen, I decided to add her to the nest. After some walking around, she discovered the nest entrance! I'm not sure If she had any luck getting in, either way I have my fingers crossed. The knowledge of them having at least one queen puts me at ease. If she successfully has workers, then this would be my first colony of social parasites! This journal might just be a Lasius Umbratus journal!

Here's one of their many nest entrances: Currently, It's just a waiting game to wait until their current soil nest dries out and they discover the nice humid test tube and nest I put in for them! I'll attach photos if anyone wants to see! Any tips/suggestions would be greatly appreciated! Thanks!

These ants have really gone to work in the soil. I checked up on them this morning and found five small nest entrances! They really like digging, and I'll be sure to move them into a naturalistic setup when they get bigger in numbers. I saw the Lasius Umbratus queen enter the acrylic nest, and she was still there this morning. Very peculiar. I'm almost certain she is a L. Umbratus queen but I could be wrong. If I see any eggs I will transfer her into a test tube setup.  It rained last night, so today was extremely humid and warm out, and thankfully I left their lid on. Their soil would have been moist for days if I didn't. There would be no way they would move out. The soil is still in the process of drying out, and most of the nest is still moist. It should be about five days or so before they are forced to move out. The ants have discovered the nest, and I found a few workers looking around in the nest. I'm removing some of the soil they aren't nesting in to give them less space to expand into and be forced to explore. I'll add some honey and insects, (apparently these ants will eat anything) and I'll update this post in a day or two! Here's the queen residing in the nest ^^

So this afternoon I found something possibly game changing for this colony. Temps spiked to 80 degrees Fahrenheit, and I found what was either Nylanderia Parvula, or Tapinoma Sessile. Judging by the fact that Tapinoma Sessile are literally everywhere in my yard, I'm 99% sure it is T. Sessile. I found four queens and put them all in the bin! The workers should accept them, and just like that, I just got a 200 workers, four queen (possibly plus) colony without waiting two years! Please don't try this unless these ants are as established in your area as they are mine. I'm hoping the ants move into their Aus Ants nest soon, and I just put in some food for them (sugar water and a june bug grub) 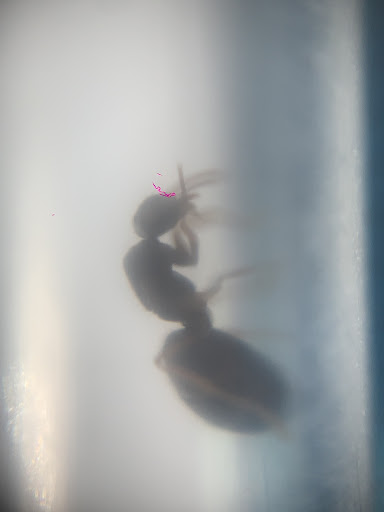 Here is one of the tapinoma queens I caught [ABOVE]

So it turns out the queens I caught are likely not Tapinoma Sessile, and probably under the family Formicidae... No Idea what will happen to them, there is still a chance that they ARE actually Tapinoma Sessile. I have no idea if these ants are even Tapinoma. They could be Nylanderia Parvula, but I find this unlikely.

I found 3 queens that were identical to the queens I caught last update, and I'm raising them in a test tube setup. I didn't take any pictures due to how stressed out they are, and I might introduce my other Tapinoma Sessile test tube colony to them due to them having problems raising brood. They have 3 workers and one eclosing pupae.

Over the past few days I've been catching tons of Tapinoma Sessile queens! My colonies currently include:

Captured colony, 0-4 queens (if they were accepted by the colony), 50-200 workers (caught this year, relatively small)

As of right now, the T. Sessile colony in the bin have not moved into the nest. They've instead decided to move under the nest to take advantage of the increased humidity. I'm okay with this, and I'm letting them settle down where they want. Eventually they will have to move into the nest, and I want them to be the ones to decide to. I've raised queens of this species, and know it should be around 2 months before they have nanitics. I will be making a care sheet to give even further information on their care! I'll make another update when either my queens get eggs, or the bin colony moves into their nest! Six queen colony [ABOVE]. Five of the six queens are delates that were caught under queen ant traps (rocks and concrete slabs sprayed with water to attract new queens to nest under them), and one was an elate I found in my Myrmecina americana setup that was starting to shed her wings.

I feel like I haven't updated this post in a while, and a LOT has happened. I caught around 30 Tapinoma Sessile queens in total this year, and almost all of them were caught in my pool. I have an above ground pool that we just set up a few days ago, and it has been absolutely game changing for catching queens. I've put the "pool queens" in their own test tube setup (currently they have 21 queens!) and the rest in other test tubes. The six queen colony has a growing egg pile, the 3 queen colony lost a queen but have decently large pile of eggs, and the colony in the giant bin I have is STILL reluctant to move in. I'm contemplating just dumping them in a controlled spot and manually moving the workers, brood, and queens, because these workers could be introduced to my newly caught queens. Still not sure yet, I'll be sure to update this post when this happens! I took some workers and brood from the bin colony, and moved them into an outworld. After a few days, the actually moved into the Ants Aus nest I put in for them! I introduced about 10 queens, and every time they interacted, the workers would start biting and harassing them. This is strange since I'm almost positive the queens came from the same super-colony that covers my yard. There has to at least be one queen from that colony that they would accept, so I'm not worried. So far, no queen. These ants are surprisingly picky eaters, but seem to like honey and apple for sugar, and chicken, cricket legs, and fruit flies for protein. I'll keep experimenting with them to see what they really go for! 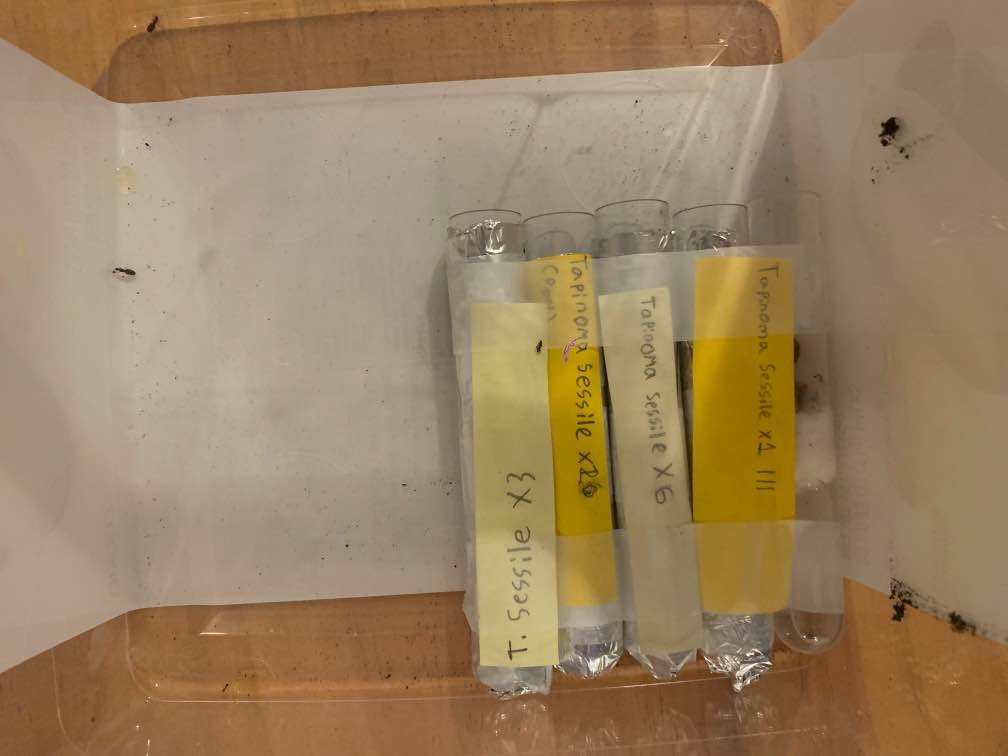 I just combined all of my queens in one setup! I also collected about 20 or so workers from a mature colony and put that in their setup. To my delight, they cooperated with the queens! They could very well be Brachymyrmex, since the queens look very similar, and the worker looks like a Brachymyrmex worker, but either way they still didn't kill the queens. Tapinoma look a lot like Nylanderia and Brachymyrmex. Sorry for not posting an update quickly, school just ended so I'm going to have much more time to spend on my ants!

Cool! I love Tapinoma sessile, they are so cool with their multiple queens. Another thing about them is they also like moving alot. keep us posted!

Cool! I love Tapinoma sessile, they are so cool with their multiple queens. Another thing about them is they also like moving alot. keep us posted!

They are really interesting ants! To be honest, I have no clue how many queens there could be in my backyard, seems like maybe 1,000-2,000. Crazy stuff! I found out the hard way they like moving around when they broke through my escape barrier! I'm actually updating this right now and should be doing so every other day or so. They really are keeping me on my toes!