12 replies to this topic

Hello everyone! Since I'm leaving soon, or have left if it’s after the date listed hereafter, for my mission to Mexico City.(September 2nd, 2020-September 2022) I've decided to found 1 last Stigmatomma pallipes Queen before I go. This is my specialty ant on this forum and I thought a lot of people would like to have the necessary information to keep these interesting ants! This will allow those who need help with them to still have my information while I'll be gone for 2 years. I hope that this will help!

First off, you obviously need a queen. IDing is important! You can tell queens from workers by they large thorax (there's many other signs but in the moment, when you lift a rock you won't see those signs as fast as you see this one) 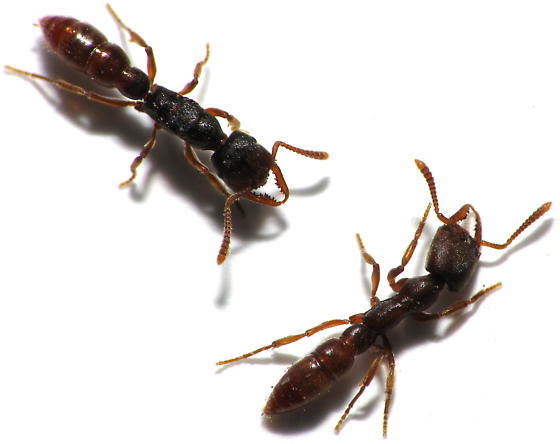 Now you can find Stigmatomma pallipes under rocks in deciduous forests. You may have to look closely as thy like to freeze/move slowly and will even curl into a ball, which can make them hard to notice. You can also find queens during their nuptial flights in August-September. Mine typically fly August 29th and September 12th. (3x on August 29th and 2x on September 12th over the past 5 years). But keep a look out in your area, it may be different and based off of weather conditions. Black lights are the best way to find them, go to other people's journals on black lights to understand how they work and the best places to put them. (There's too much info on them that I just couldn't fit it all here.)


Now to my queen. I've had her for 7-8 days. She's already laid 2 eggs (by the way, they have egg laying seasons, so don't be discouraged if your queen isn't laying, it's probably not their time yet and it depends on your region). She laid them last night. I'll post pictures later today! And as new events happen I'll add extra caring info on these girls!

I keep these ants at room temperature, which is about 73-76 depending on the year. Also, I keep their humidity at 70%, don't go higher as you'll grow mold and mycelium (mushroom stuff) will grow across you're line of sight rendering the point of glass/plexiglass/acrylic useless. But also don't go anymore than 5% lower than 70%, as the workers die...

Another setup you can use is a test tube setup with an outworld. In the outworld, add plaster to the bottom with a hydration system. Keep it hydrated. I added sand on top the plaster as it helps them stick out more but you can add coco fiber or whatever substrate works for you.

Founding: When you first get a queen, put her in a Petri dish setup with plaster, not a test tube. I’ve found that petridishes increase their survival rate significantly and entices them to lay more eggs. Now, they are semi-claustral so you need to feed her every week. They lay eggs in April-May and September-October. When you’re in these egg laying seasons, feed her more. She’ll lay 10-15 eggs instead of just 2-5 eggs. She’ll get physiogastric just like Ponera does in their egg laying seasons. You can feed her soil centipedes, stone centipedes (if beheaded first), mealworms, grubs, and termites. In non egg laying seasons, feed her 1 centipede/1mealworm/1 grub/10 termites. In egg laying seasons, double it! Really just watch her and how much she eats and doesn’t. When she gets larvae, keep following the double feedings and when egglaying season comes, triple it. When larvae start to try to pupate, they need substrate to for their cocoons. The cocoons are brown in color. The larvae are also semi-mobile and are interesting to watch. Though, when they are mobile, it means they are hungry so you need to feed them.

Workers: It takes about a year to get workers, so they are very slow growing. Though once you have them, keeping them is super easy. They don’t need sugars and they just need a high humidity (and with plaster that’s easy to do). You should have several larvae when you get workers (unless you have the queen a worker during founding. My only warning with that is that she may be infertile and you won’t know until over a year later. Infertile queens die if they have no workers.) and they should be halfway through development by then.

This species doesn’t really hibernate in my area, though they may in more northern areas. I’ve found that they just dig deeper in winter and feed on termites and hibernating centipedes when given the opportunity. They do act slower but that isn’t much different from normal. Just decrease the temp 10ish degrees if you want to hibernate them. 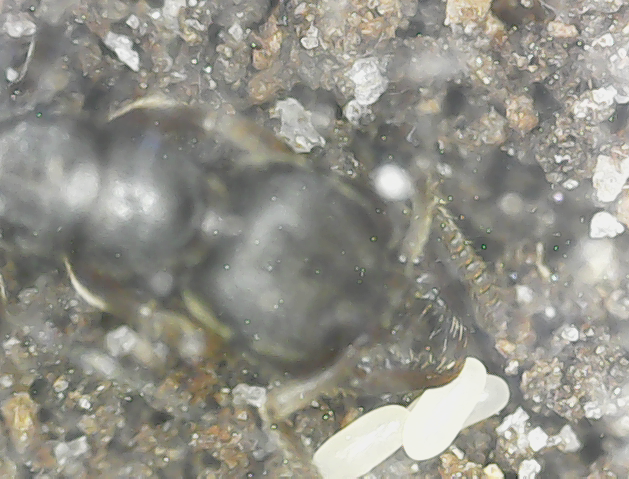 She has 2 larvae halfway through development! She has a new setup cause the old one needed to be cleaned and she did better in her new setup so I just kept her there. I’ll add photos later today (at least I plan to, and I apologize if I don’t)

I caught a colony of these under a rock! Not sure if I have the queen tho.

I once found a colony of these in my yard. It was several years ago, though, and I was pretty inexperienced, and couldn’t care for them.

Awesome info. I love these ants, so I hope you don't mind me laying claim to the queen/colony once you depart on your mission

Edit: if at all possible of course, who knows...

Awesome info. I love these ants, so I hope you don't mind me laying claim to the queen/colony once you depart on your mission

Edit: if at all possible of course, who knows...

Sure! You may have her and whatever workers she may develop (if she even survives)!

*New Update* I've been trying to take pictures of her and her eggs but they all come back blurry so I ordered a digital microscope, so for the time being, no pictures...

She still has only 2 eggs. She hasn't eaten them yet, which is also good. Also, she doesn't seem disturbed by the light at all!

I also added more to the original post above about their care!

*Update* I got my digital microscope! She also now has 3 eggs! Pictures are in the original post!

Never seen any alates of this species. The one colony I found was living under a rock.

Updated as of today! This is a “finished” product of how to found them. I wish all of you luck with this species! I’ve loved keeping them. If I have more to add, I will do so.

Thank you for the tutorial! I’ve found a small population of them and I’m hoping to get some queens, this will come in handy

Thank you for the tutorial! I’ve found a small population of them and I’m hoping to get some queens, this will come in handy

Of course! Have fun with them!

Also tagged with one or more of these keywords: stigmatomma, pallipes, ants, founding, eggs, care, venomousbeast