51 replies to this topic

On Thursday as some of you may know, I went to the park and captured a young colony of Camponotus castaneus with workers about 30 strong and some eggs. I had my aspirator with me and I captured all of the colony members and the brood. The queen, who I've named Flame, is rather thin, but she's still well fed and she's been plumping up as time goes on. I ended up loosing the brood as soil stuck to them and I wasn't able to see the eggs as I was sifting through the material that got sucked into the aspirator. There were a few workers that ended up dying from a few reasons, such as being squished, getting killed by the Crematogaster lineolata workers that I also put in the aspirator as I had nowhere else to put them, or injuries sustained from reasons unknown. I've had them for almost a week now, and only two other workers have died. The colony is probably about two years old as they have two majors, one of which is acting bizarre. She is sitting in one of the other nesting chambers, not moving, not interacting with the rest of the colony. The colony has a few repletes and they have stopped eating for now at least. This is by far my favorite ant colony that I have and I love to look at them doing their daily activities. I especially like watching them care for the queen. I will update you guys on their progress as the weeks go on. There probably won't be too much to update on however as I am going to be hibernating them soon. Here's a nice picture of Flame: The gorgeous queen of the colony, Flame.

I've been working on a new nest for these ants for a little over a week now, and I've finally finished it, and it's not half bad. 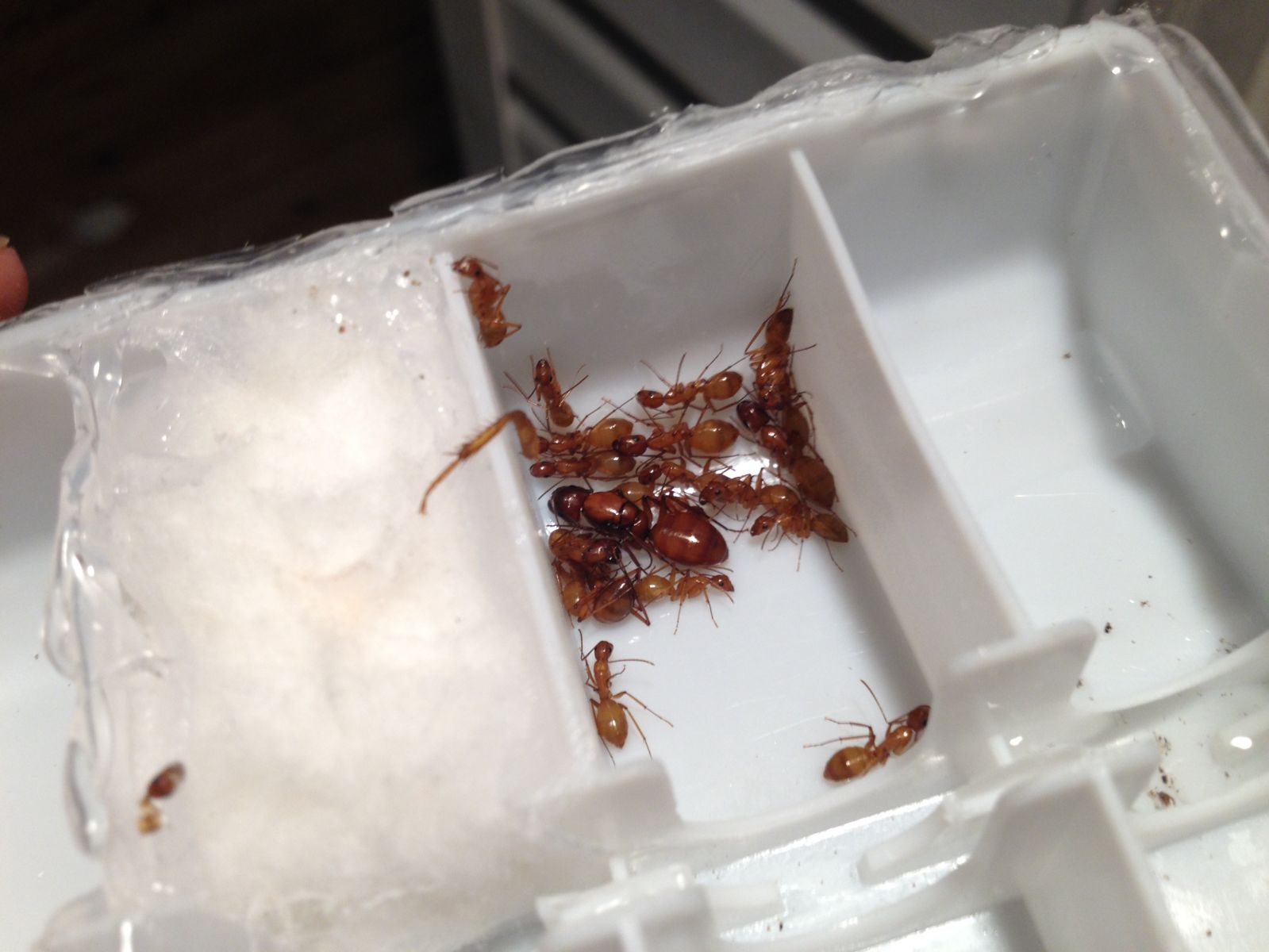 The nesting area made out of firebrick. The workers checking out their new formicarium. I have removed the firebrick nesting area as I have decided to make this more of a vivarium, and also because they are starting to make a new nest under the rock. They were actually using the nest as a garbage site! So far only two workers have died, hopefully that's it.I'm hoping that by tomorrow morning, they will have constructed their new nest. Only time will tell...

Thanks. You're lucky as in California you have Camponotus ocreatus, the largest ant species in the US, even bigger then Camponotus castaneus! I have seen them in Texas, and let me tell you, those queens are huge! Here's a picture of the queen I caught: What a great looking colony! Best of luck.

Camponotus castanaeus is one of my dream ants. I really hope to find a queen next spring! I don't see many in my yard, but my parent's yard is full of them.


"The ants are a people not strong, yet they prepare their meat in the summer." Prov. 30:25
Keep ordinary ants in extraordinary ways.

What a great looking colony! Best of luck.

Camponotus castanaeus is one of my dream ants. I really hope to find a queen next spring! I don't see many in my yard, but my parent's yard is full of them.

I always find young colonies under rocks, that is where I found this one. Go out into the woods and flip over some rocks, you'll come across them eventually. I sometimes find Camponotus americanus under rocks too, so look out for those. I have never seen one of their queens however.

I've had to make a new formicarium for these ants as their previous one wasn't working out for them. I ended up loosing 7 workers out of 21! They never dug, they only hung out in the open and occasionally hid under the debris in the formicarium. This formicarium is very simplistic, but the good news is that it's not permanent. I have some plans to make a plaster nest for them, and I think you guys will like what I have in mind. I am going to use plaster for all of my nests actually. For now, here are some pictures of the new formicarium: 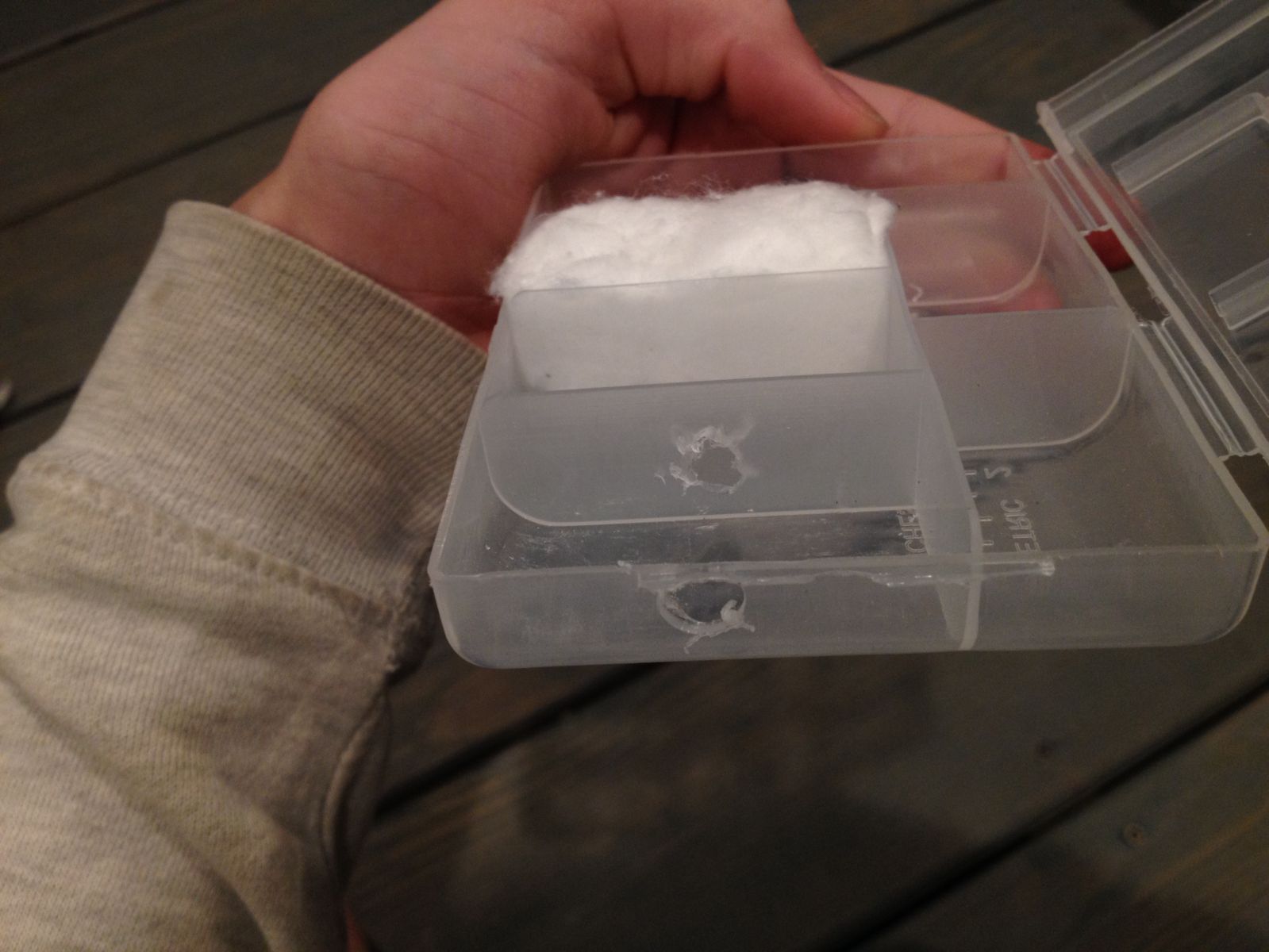 And don't worry, while some of the ants look like they're dead or dying, they're just cold.

I am happy to report that they have finally moved out of the outworld and into the nesting area. They've been in the outworld for 4 days, and I'm glad to see them move in. There has only been one death since I moved them in, but other than that, they've been doing good. Please excuse the mold. It's sealed off in the hydration chamber so it can't harm them.

Since these ants spray formic acid, consider adding some substrate too absorb it, as it could poison the ants.

Since these ants spray formic acid, consider adding some substrate too absorb it, as it could poison the ants.

Ah, that's a pretty good idea. I'll add some to their foraging are so they can move it into their nest as needed.

As most of you know, I have introduced 3 queens and 4 workers into this colony, and they are doing good. One of the queens has died, but she wasn't doing good to begin with so that's understandable. They all seem to be getting along pretty well, and I haven't seen any signs of violence towards each other. I will be keeping a close eye on them however. I actually saw one of the new workers cleaning one of the original workers. Also one of the original workers feeding one of the new queens. So that's a good sign.

One of the older workers has died, a large individual with a broken leg. I'd come to like her so it's sad to see her go.

The brood has been developing well, and there are three new eggs, although I think they may be dead, as they are orange. The reason I am not hibernating them, is because I have not seen their species hibernating, just moving a little slower then usual. I saw some workers running to the entrance and running out of the nest when the nest was disturbed in a fairly large colony hat I found last summer, plus the queens are laying eggs and the brood developing.

Quick update, the eggs are not dead, just very fresh, and in the time between these two posts, two new eggs have been laid. I also saw one of the queens, probably the queen who laid them, cleaning them.

Update? I have these in my area so I will look for them soon. (I found a worker once).

Update? I have these in my area so I will look for them soon. (I found a worker once).

Unfortunately, they died during hibernation.

Bummer! This is the next colony I want to start!

Bummer! This is the next colony I want to start!

I'm looking for more founding colonies. It always find them under rocks.